Note: This is only a fraction of what I have to say about this matter and it is far from complete, and don’t be surprised to see more posts on fats, particularly saturated fats, in the near future. 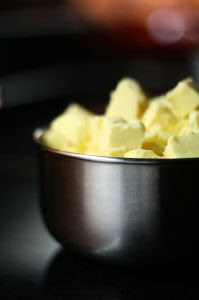 It’s raining outside, and I sit here sipping on my raw hot chocolate. I love mornings like this. The rain makes it so cozy, and knowing that it is cold outside, I feel very grateful that I have a warm home with everything that I need. There’s a Hitchcock documentary on in the background.

I also begin pondering on a subject that I have spent a bit of time researching on, and I dwell upon this subject for a while, trying to discover why this information is not out to the majority of the public. This is the subject of saturated fat.

Yikes! This term even strikes a bit of fear in myself, because I have always been told that these natural, nature made (or God made, depending on what you believe) fats are harmful and contribute to a variety of diseases like heart disease and elevated cholesterol.

However, I have found this topic to be quite controversial, and with the analysis that I have accumulated in my nutritional research, I quite strongly believe that saturated fat isn’t the devil it is made out to be.

After reading studies accumulated by Dr. Mercola, studying the diets of native and isolated populations (via Nourishing Traditions

and The Weston A. Price Foundation), and really delving deep into controversial research, I have found that saturated fat has been a part of healthy populations for centuries. In fact, it has nourished all people for hundreds of thousands of years (maybe millions?), and it wasn’t until the USDA told us to eat more carbohydrates and less overall fat to fight heart disease, that heart disease actually increased.

The “theory” that saturated fat is corrleated to an increase in heart disease was developed by Dr. Ancel Keys in the 1950s (I just finished a fascinating book about Keys’ starvation experiment

This study, however, gained much publicity (Ancel Keys was a big guy on publicity of his experiements), and the “Low-fat” craze swept the nation, and later the world, with low-fat and fat-free products for every thing.

According to nutritional researchers Mary Enig, PhD and Sally Fallon, heart disease makes up 40% of all US deaths, and is growing, which should suggests (if you believe in the “Lipid Hypothesis”) that saturated fat consumption (mainly in the form of animal products) has increased. In actuality, saturated fat intake has decreased.

How come if the saturated fat has decreased, the heart disease risk has become even greater? It is believed by many that it has to do with the high level of carbohydrate intake in the forms of processed, refined grains and sugars. These stimulate our insulin levels and elevates our triglyceride and cholesterol levels and hurts our hearts. Plus the intake of trans fats in processed foods, we have consumed large amounts of grains that have degraded our health.

If you look at the USDA food pyramid, you will notice that the majority of our calories should come from grain products, and only HALF of those grains should be whole, complex carbohydrates (these will provide a steadier release of glucose in our system).

However I firmly believe that all grains should be limited, or even eliminated, for overall health. Fresh vegetables, high quality animal proteins and fats and small quantities of soaked and sprouted grains (more on that later) should make the bulk of your diet, as these will not cause a spike in blood sugar.

I definitely don’t want you to take this information as the absolute truth, because I strongly encourage everyone to fully research the nutrition information they hear, so that they can make a strong and firm decision about their health. My research has convinced me about saturated fat being an essential part of life (after all, around 50% of our cells in our body are made of the stuff!).

If you have any questions, or would like to be pointed to sources, studies or research articles, please comment below. I’ll be uploading a new recipe very soon, so stay tuned!

Until next time, this has been the Healthy Advocate.

3 thoughts on “The Twisted Truth About Saturated Fat”