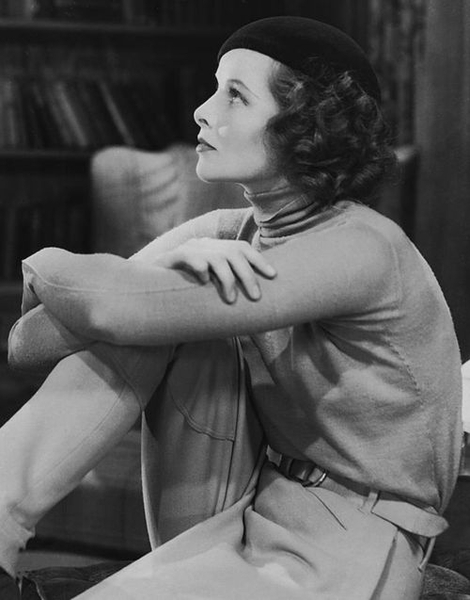 I own a television, but the only channel I watch rather exclusively is Turner Classic Movies. Ever since I was 10 or 11, I’ve been fascinated by classic films. It started with Alfred Hitchcock’s “The Birds“, which I had my parents rent for me. I watched that movie probably over 100 times. I even started transcribing the film. That’s how much I enjoyed it. I’m now a Hitchcock collector.

From this, I started to journey into other films from other directors. I went from the actors that were often in Hitchcock films, such as Cary Grant, James Stewart, Grace Kelly and Tippi Hedren (of which I have her autograph). I started tuning into TCM when I was 12 or so, and completely devoured films like “Gone with the Wind”, “The Women“, “Topper” and more. I fell in love with actresses such as Lillian Gish, Norma Shearer and Katharine Hepburn.

The latter deeply intrigued me. She’s a different sort of person, with very unique, unconventional (at least, at her time) ideas about life and how to live. It wasn’t until recently that I watched, “Katharine Hepburn: All About Me” (I’m thinking this is in public domain) and found that one of her “secrets” to her long life, and long, successful career, were rooted in simple health disciplines that anyone can accomplish.

And so do I. What I once thought of as a fad may actually show some merit, health wise. Katharine Hepburn recommended cold showers, and stated she still took them well into her 80’s. It was said to “build character”. Apparently, cold temperatures activate our stores of deep brown fat, which is responsible for burning outer, harmful fat. Studies indicate that this may help promote safe and healthy fat loss. Thus, cold showers may be seen as a good way to boost metabolic rate, if only for a short time.

Cold showers may also help reduce inflammation in the body. Inflammation, or heat, is connected with cancer, obesity, diabetes and Alzheimer’s, making it important to utilize anti-inflammatory tools in our diet and lifestyle. Spices such as turmeric, cinnamon and ginger are highly anti-inflammatory, as are leafy greens and grass-fed beef. Cold temperatures also decrease inflammation in the body, therefore making cold showers a regular part of my (summer) routine. Just be aware, I won’t be taking cold showers during the winter! 🙂

In my personal opinion, diet comprises almost 80% of your health, with your lifestyle being the other 20%. Both of these combine to determine which genes are expressed and which ones are suppressed. However, exercise is still incredibly important, as it helps to balance a healthy diet. Katharine very much knew this.

As a young girl, she was very athletic, and could swim, climb trees and break into houses (seriously). She played tennis, golf and even rode her bike well into her 80’s. She is definitely an inspiration on how to stay mobile when the body gets older. She kept her mind sharp by constantly working, as well as moving.

I don’t think she ever talked about relaxation and health, but I know that when I watch her, as well as other classic actors and classic films, I become deeply relaxed. Relaxation is very, very important for maintaining mental, emotional and physical health. It helps to keep blood sugar balanced and stress hormones down (namely cortisol). So, finding a way to relax, in your own special way, is very important to maintain health and longevity.

Are you a classic film buff? What movies do you like? Which actors/actresses? I love silent films, talkies, black and white, musicals (depending), dramas, comedies, etc.

6 years ago Brandon May
8 min read

The Top 3 Health Benefits of Meditation