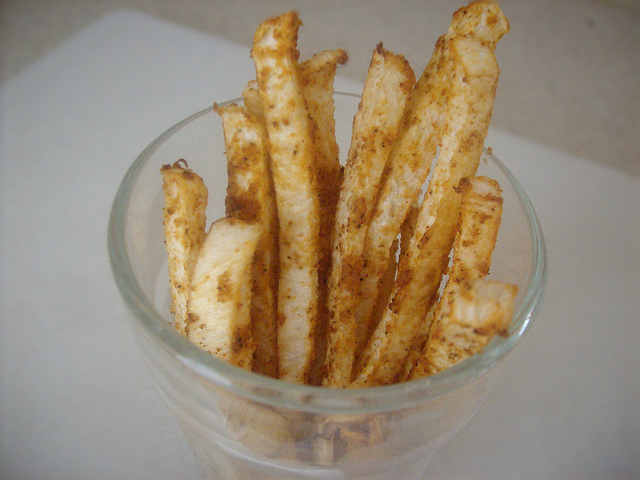 I’ve found a new french fry recipe that I love. I don’t usually go for fries from white potatoes, due to their high glycemic index (and also the fact that they are often fried in genetically modified soy and/or canola oils). These jicama fries, however, provide a side dish satisfaction that is slightly similar to their white potato counterparts.

Jicama is a root vegetable that is very under used in the USA. Most people don’t know how to spell it when they hear it. It’s unfortunate, because raw jicama provides 40% of your daily needs for vitamin C in just one cup, as well as 6 grams of fiber and just 5 grams of net carbohydrates. It’s also has a very low glycemic load, so it is safer for those watching their blood sugar, insulin and weight levels compared to white potatoes.

One thing you should know about jicama. Jicama, even after cooking, retains a slight crisp in the center. It’s refreshing and very light. Safe to say, these aren’t your conventional french fries. Which is alright, because most of you guys (including myself) are not always conventional (if at all!). Some of my jicama fries, after baking, did become soft all the way through, but just to let you know before hand, most will be soft on the outside and slightly crisp on the inside.

4.7 from 3 reviews
Print
Jicama Fries
: The Healthy Advocate
: Side Dish
:  5 mins
:  25 mins
:  30 mins
: 4-6
These baked jicama fries are delicious - soft on the outside and delightfully crisp on the inside. Experiment with the spices.
Ingredients
Instructions
Wordpress Recipe Plugin by EasyRecipe
2.2.1
Do you avoid white potatoes? Have you ever tried sweet potato fries? I enjoy them occasionally. Sweet potato fries are a bit lower on the glycemic index, plus they are highly anti-inflammatory.

P.S. If you haven’t yet entered in my giveaway for a FREE quart (that’s 4 cups!) of organic, virgin coconut oil, please do so! It’s free to enter. Please share the giveaway to your friends. Okay, promotion over. 🙂

Until next time, this is The Healthy Advocate.