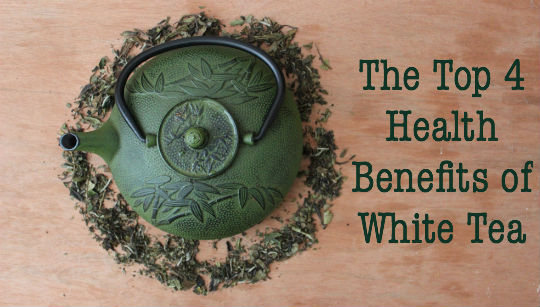 Tea has been cultivated and consumed for thousands of years, and only recently has its widely suspected health benefits received validation from reputable scientific research. Second to water, tea is the most popular beverage choice worldwide. While black tea is perhaps the most common type of tea consumed, other types, like white, green, and oolong, are slowly increasing in popularity. White tea is quickly becoming green tea’s rival in regards to reported health benefits, yet it still remains largely unknown to the casual tea consumer. But what exactly is white tea, and what are the benefits of white tea that make it so unique?

Black, green, white, oolong, and pu-erh tea all come from the same plant: Camellia sinensis. The key to its flavor, color, and grading depends on how the plant is processed. Black tea is typically heated and oxidized, resulting in a darker color and richer flavor. White tea leaves, on the other hand, are simply plucked from the plant and allowed to wither and dry. The minimal processing results in a greater concentration of antioxidants, even greater than the antioxidant content found in green tea. Contrary to its name, white tea is not in fact white; the leaves are typically green or silver, and the brewed tea is often a pale yellow. White tea benefits the cardiovascular system, increases metabolic rate, and some research even shows it may fight the visible signs of aging.

Due to the minimal processing and lack of heat subjectivity, white tea retains much of its antioxidants, among other beneficial constituents. The health benefits of white tea are typically associated with these antioxidants. Also known as catechins, antioxidants in tea provide numerous benefits, many of which have yet to be discovered. According to the Journal of Inflammation, catechins form around 30% of the dry weight of tea. [1] Antioxidants have a variety of functions, from defending oxidation at the cellular level to protecting the cardiovascular system from the damaging action of free radicals.

Recent research has revealed that white tea contains a relatively high amount of enzyme inhibitors known as anti-collagenase and anti-elastase. [2] Collagenase and elastase are enzymes that break down collagen and elastin, respectively. While this can serve a valuable purpose, particularly in the healing of wounds, the excessive production and expression of these enzymes play a role in initiating the visible signs of skin aging. White tea contains significant amounts of anti-collagenase and anti-elastase, both of which inhibit the overexpression of these enzymes. Whether the consumption of these enzyme inhibitors protect against skin aging is still under debate; however, it still may be a strong preventative tool to have in your kitchen and anti-aging arsenal. In addition, white tea contains potent anti-inflammatory compounds that may also explain its benefit for skin health. [3]

It should be noted that while white tea benefits weight loss efforts, it only does so in combination with an overall healthy lifestyle. The main metabolic-boosting compound in tea and one of the primary nutritive constituents in C. sinensis is caffeine. This is typically found in lower amounts compared to coffee. It’s been well solidified that the caffeine in tea may provide a metabolism-boosting effect; however, it’s not just the caffeine that bestows this benefit. [4] The antioxidants may also play a role in regulating fat metabolism via the upregulation of enzymes responsible for hepatic lipid oxidation. [5] White tea is lower in caffeine than other types of tea, however, making it a perfect choice for tea lovers who are wishing to reduce burden on the adrenal glands.

All forms of tea offer natural anti-inflammatory compounds essential for reducing the risk of inflammation-related diseases, cancer included. Research on the health benefits of white tea has discovered the beverage offers significant anti-inflammatory effects. A recent 2015 study found that white tea has potent antiproliferative effects against colonic cancer cells, and the antioxidants found in the young tea leaves in the study also protected against DNA damage. [6] White tea has also been shown to initiate apoptosis in non-small cell lung cancer cells. [7] Although future studies are crucial for determining the underlying mechanism behind these effects, tea’s antioxidative, anti-inflammatory, antimutagenic, and anticarcinogenic compounds potentially explain the inhibition and apoptosis of cancer cells in the published literature.

How to Prepare White Tea

Surprisingly, white tea differs in preparation method compared to that of black and green tea. Typically, you would pour boiling or near-boiling water over black tea leaves and let steep until your desired strength is reached. White tea, however, needs hot–but not boiling–water brought to around 160º F. This prevents burning the delicate leaves and ensures a smooth, delicious taste. If you don’t want to measure your water temperature, that’s fine–simply bring water to a boil and then let stand for 1 ½ minutes. After this time has passed, pour the hot water over fresh white tea leaves (white tea, particularly white peony tea, is more voluminous than black or green tea, so it’s best to use around 1 tbsp. white tea leaves per a 6- or 8-oz cup) and let steep for about 5 minutes. White tea has a gentler flavor profile; however, longer steeper times will increase the risk for a more bitter, astringent flavor.

Silver needle and white peony are the top white tea varieties. Sweeten with stevia, xylitol, coconut palm sugar, or raw honey. Or, if you’re like me, you like it unsweetened.

P.S. Happy 2016!! Are you a tea drinker? What type of tea is your favorite? Please let me know in the comments!

7 years ago Brandon May
8 min read

The Top 3 Health Benefits of Meditation

7 years ago Brandon May
3 min read

The Truth About Coffee Bean Extract