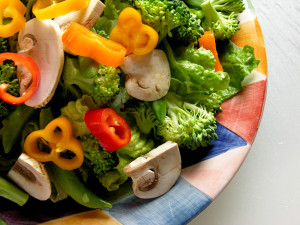 Long-term adherence to a mostly plant-based diet is associated with lower levels of leptin and insulin, greater blood glucose control, and favorable changes in markers for obesity. This is according to a study published in the Journal of Nutrition.

The Biological Mechanisms Behind a Plant-Based Diet and Diabetes, Obesity

The study was a cross-sectional analysis of patient data from The Nurses’ Health Study II. In total, the researchers randomly selected 831 women (mean age, 45 years; body mass index, 24.6 kg/m2) from the study who had 2 blood samples collected from 1996 to 1999 and 2010 to 2011. Researchers examined the association between a plant-based diet and diabetes, obesity, and inflammatory markers. The following markers in participants’ plasma were analyzed:

Participants with higher hPDI — ie, those who consumed higher amounts of plant foods and low amounts of sugar and refined grains — had significantly lower plasma concentrations of leptin, insulin, and hsCRP as well as higher levels of adiponectin and sOB-R (biomarker differences per 10-point higher hPDI, −7.2% for leptin; −10.0% for insulin; −13.6% for hsCRP; 3.0% for adiponectin; and 1.9% for sOB-R; p≤0.025).

Conversely, individuals with higher uPDI, which represented a diet consisting of more sweets and refined grains and lower amounts of plant-based foods, had higher leptin (4.4%) and insulin (4.8%) concentrations (p≤0.048). Over time, increases in hPDIs inversely correlated with changes in leptin and hsCRP (biomarker changes per 10-point hPDI increase, −7.7% for leptin and −17.8% for hsCRP; p≤0.005), according to multivariable-adjusted analyses. Additionally, increases in uPDI over time positively correlated with changes in leptin (10.1%), hsCRP (13.5%), and IL-6 (12.4%) concentrations (p≤0.021).

Limitations of this study were the inclusion of mostly Caucasian nurses without metabolic diseases as well as the use of self-reported questionnaires to obtain participants’ dietary data.

Despite these limitations, this study adds to the existing literature that suggests a mostly plant-based diet is associated with lower risk factors for cardiovascular disease, including obesity and diabetes. According to the researchers, these data presented in this cross-sectional analysis “corroborate the recommendation that increasing the intake of healthy plant foods and reducing the intake of less healthy plant foods simultaneously would be essential for the prevention of cardiometabolic diseases.”