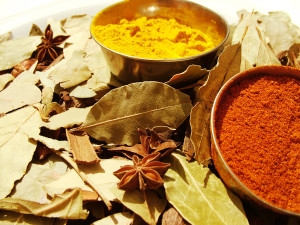 A study in the Journal of Nutrition found that the consumption of several herbs and spices reduce inflammation after high-carbohydrate meal rich in saturated fat.1

Spices shown to reduce secretion of postprandial pro-inflammatory cytokines (ie, inflammatory markers in the body) in this study included basil, turmeric, bay leaf, cinnamon, and black pepper, among many others.

In this crossover, randomized controlled trial, a total of 12 nonsmoking men between the ages of 40 to 65 years with ≥1 risk factor for cardiovascular disease were randomized to 1 of either 3 treatment groups:

According to the study investigators, a significant spice-by-time interaction was observed in regard to the secretion of interleukin (IL) 1 beta (IL-1β) (p<0.001), IL-8 (p=0.020), and tumor necrosis factor alpha (TNF-α) (p=0.009) cytokines and chemokine from lipopolysaccharide-stimulated PBMCs.

Approximately 240 minutes after the high-fat, high-carbohydrate meal supplemented with the 6 gram spice blend, there was a 1314% reduction in the secretion of IL-1β (ie, mediator of inflammatory response) from LPS-stimulated PBMCs, which was significantly higher than that observed with the 2 gram spice blend and the control diet.

Spices Reduce Inflammation — But to What Degree?

While promising, it should be mentioned that this study included only men who were overweight or obese and had a waist circumference of ≥94 cm. Also, while the study examined a diet high in saturated fats and carbs, the researchers did not differentiate the impact of saturated fat vs trans fats on inflammation or the sources of these fats on cytokine levels. Additional studies may be needed to determine the impact of other spices, including cayenne, on postprandial inflammatory markers.

This study adds to the literature showing associations between the consumption of spices and inflammation reduction. Turmeric, for instance, contains anti-inflammatory compound curcumin that has been shown to benefit inflammatory diseases.2 Compounds in cinnamon, namely trans-cinnamaldehyde and p-cymene, have also been shown to possess anti-inflammatory activity via its ability to reduce lipopolysaccharide-dependent secretion of IL-8 in THP-1 monocytes.3,4

6 months ago Brandon May

6 months ago Brandon May